Was Edgar Allan Poe Hungarian? Not so far as we know. Largely, his ancestors came from England. However, he was important to a number of Hungarian writers. For example, a major Hungarian translator of Poe’s work was Babits Mihály.

He is considered by many to be the first American author with an authentic American voice. Mark Twain may have rights on that title, as might Herman Melville. But Poe has uniquely influenced world literature as both a poet and short-story writer. American readers can easily quote from “The Raven,” The Bells,” and “Annabel Lee,” but Poe’s poetic reach extends far past America’s limited shores. His careful wording and exact meter lifts language not only in its alliterative tone, but also in its essence, drawing the reader in through the use of the senses. Charles Baudelaire first brought Poe out of English and into French, and many European poets have followed suit.

In Hungary, Poe’s influence has been especially remarkable. Levente Osztovits wrote “This absolute musical, consciously composed visionary poetry fulfilled an inspiring and fermenting role, at the same time nearly fatally shutting the door on other trends of American poetry.” “Tete-A-Tete With American Literature: A History of Literature and Three Anthologies,” The Neva Hungarian Quarterly, IX (1968), 199-206, as quoted in Fugitive Poe References: A Bibliography by Judy Osowski.

Likewise, his detective stories wrought a new structure of thinking with the short story format. Basing his tales on the news of the day (like “The Murders of Rue Morgue”), he designed how the rest of the world would tell a police story. Not only have Sir Arthur Conan Doyle and Agatha Christie imitated Poe, but so have the writers of classic television shows like Columbo, NYPD Blue and Dragnet.

Looking for some creepy movies inspired by Poe’s writing? Check our our Bela Lugosi area. Not only will you learn about that famous Hungarian actor, but you’ll also find a huge list of films. Great for the trivia buff and movie shopper. 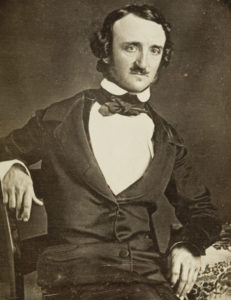 The Raven & Other Classic Poe Stories