The Lost Rider: A Bilingual Anthology

The Lost Rider: A Bilingual Anthology

“The Lost Rider: A Bilingual Anthology” published by Corvina, is a decent selection of major Hungarian poetry. Chronologically presented by the year the poet was born, dating from Bálint Balassi (1554) to István Kormos (1923), readers are treated to a cross-section sampling of some of the greatest poets and poetry.

The left page in each spread in Hungarian. The right is in English. The editors have used this layout even for the table of contents, listing each poet, the years he lived, and the poems of his which are included.

Autumn appears in Paris yesterday.
Silent down St. Michel its swift advance,
In stifling heat under unmoving branches
We met as if by chance.

In all, 23 translators are credited. Occasionally, the English comes off less poetically as a result, having that translated sound to it. Rhyme schemes are kept dutifully, as is line breakage. In doing so, the meter is sometimes clunky or forced. As can happen with so many translators, both British and American English usage occurs throughout the anthology.

George Szirtes, perhaps best known for his English translation of “Anna Edes” by Dezsõ Kosztolányi, dominates the number of translations.

Missing, and therefore not as useful in an academic setting, are an introduction, basic biographies, and essays discussing themes and issues. These poets deserve the kind of work W. W. Norton publishes through its anthologies and critical editions.

As a nice cultural touch, Corvina typeset the volume in the very readable Janson typeface, which was designed in the 17th century by Hungarian Miklós Tótfalusi Kis (previously attributed to Anton Janson).

An update is necessary as well. Most of the poets wrote long before the infection of Communism, but an update would allow the presentation of poets no longer shackled in their ability to speak freely.

I received mine as a gift purchased very inexpensively in Hungary, so keep your eyes open for a good price.

I fully recommend “The Lost Rider: A Bilingual Anthology.” 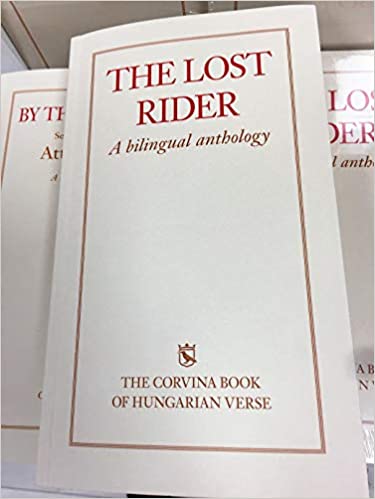