In pure lyrics and longer elegiac poems this great Hungarian poet inscribed not only his own sad fate but that of millions in an Eastern Europe that only nominally “between the wars” during the ’20s and 30s. Translator Bátki demonstrates how contemporary this work remains. -from Oberlin College Press

Captures the Language and Soul of a Great Hungarian Poet

When I think of great Hungarian poets whose works can stand the trials of translation, and have a reason to be read outside of Hungary, among the first is Attila József.

American readers of Sylvia Plath will connect with the deeply personal style intoned with tragedy, all ominous, intimate and distant simultaneously. Fans of Walt Whitman and Maya Angelou will hear resonating the tension of the inner life exposed into metered words, although they both saw more hope in life.

József’s curriculum vitae is included as an introduction this English translation of his most important poems. It serves not only as a short biography, but also as a look into why József became the poet we know. As a CV, its purpose was to apply for a job at a bank, but, in light of his suicide 10 months later, it allows the reader to peer into the make up of an artist, who, in the matter of brilliance in opposition to a disturbing mental condition, might be compared to Vincent Van Gogh. It is suspected he suffered from schizophrenia, for which treatment was not well-developed.

With the CV, there is an annotated timeline, from József’s April 11, 1905 birth to his violent suicide under a train December 3, 1937.

Different translations exist of Attila József, but this one holds its own. Oft-translated is “With a Pure Heart” which caused him much trouble, getting him kicked out of university in 1925. It begins:

“I am fatherless, motherless,
godless and countryless,
have no cradle, no funeral shroud,
and no lover to kiss me proud.”

He follows with three more stanzas that is both defiant and despondent. He gives up while shouting his goodness, but not as a savior like Christ, but as a wasted soul.

In other poems, he looks but never sees the light at the end of the tunnel. As a young communist where communism was illegal, he met strong oppression. Ironically, it is the Communists who would later take control of Hungary a few years after József’s death and twist and oppress Hungarians into economic and spiritual failure. In 1937, he wrote “Long Ago,” which is filled with existentialism dissatisfied with the emptiness it offered. He wanted a god, but believed in none.

“Long ago I realized
I’m amphibious like a frog
that lies low at the bottom
of raging skies. This poem
is a bubble of my anxious soul

“I have no evil masters and
no worms await my command.
Like fish and gods I survive
in oceans and heavens alike.

“My ocean is the murky world
of gentle, warm embracing arms.
My heaven is the clear light
of humanity conceived by the mind.”

The translator, John Batki, shows a close similarity between many of Jack Kerouac and Allen Ginsberg’s work with József’s work some 20 years earlier. While the Beats were more of experimenters of a Buddhist philosophy, and not practitioners in a strict sense, the relationship poetically presents the transcendent nature of Jozsef.

Like the Beats, József’s work was rebellious, but with more introspective depth. The struggle of his Hungarian countrymen after WWI and his own desire to stand and speak aloud informs his poems, much in the way America’s Carl Sandburg or Chile’s Pablo Neruda, both contemporaries of József.

He seeks and declares his identity, themes that still ring today. If he sang in a grunge band, he might have been Kurt Cobain. Instead, he was Attila József, a great Hungarian poet, and these are his greatest poems. 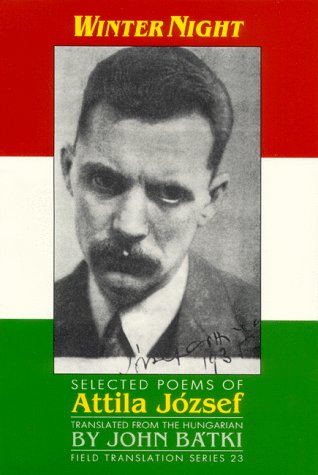